We’ve seen The Death of Superman a few times on the big screen, and this film truly gives it a good go! For me, it doesn’t quite match up to the fight in Batman V Superman… BUT it is a very, very close second. When I first heard about the animated adaption being made, I was skeptical, mostly because we have not long ago seen this story, and I thought it would be too familiar – I was wrong.

This time the story has been adapted by Sam Liu, Jake Castorena and Peter J. Tomasi, and it seems like a fresh take on the story. It isn’t like for like what we have seen before, which is part of what I love – you know the story but you are still guessing what’s going to happen next. With that in mind, it does also contain aspects from the 90’s comic book story, who doesn’t love a bit of nostalgia. The film is a perfect balance between familiarity and surprise, which is exactly what the fans need.

The creators’ take on the characters I think is spot on. Superman is perfect, and right from the start we see the Superman we all know and love. He’s confident, witty and it seems like he is having fun with it. Right from the first scene, I knew that would be the case. He puts the people before himself, and this film really shows the admiration that the public has for him. Even during the devastating fights, Superman is saving the people whenever danger is headed their way – even Lex Luthor, regardless if that affects his chances. There are a few times though where I thought – where is Superman?! There are a few incidents that happen which could have done with his help, but he was elsewhere. It also took him a while to get to the final battle and when he does, Doomsday has already defeated the rest of the Justice League. I just think if he had gotten there a few moments before him and Wonder Woman could have done some serious damage early on.

Speaking of Wonder Woman… she is fierce, very fierce, and she really lands some punches compared to the rest of the league, who didn’t stand a chance. She is so very tactical in the way she fights and that really shines through in this film – she is a true warrior. Unlike Batman V Superman, it was nice to see Batman have a go at taking on Doomsday, although he didn’t do very much damage. The dynamics between the League are great, I love that when they are in battle with Doomsday, not only do they give it their best shot, they are constantly using each others weapons and abilities to get the upper hand.

Doomsday is absolutely brutal. I’ll be honest I did not expect that from an animated movie. There are so many heads crushed, so much blood, destruction and death it is crazy. They really got him and his character spot on – well, he hasn’t really got character, he is just a real monster, a killing machine. With every punch he gets angrier and stronger, it is brilliant. The fight scenes between him and Superman are spectacles, and done so very well – although there is a hell of a lot of destruction caused.

Lex Luthor is manipulative and wanna be hero throughout. I thought his original plan was to use Doomsday against Superman, but even he took his chances against the monster. Although he is another villain of Superman, he shares some of the same morals as him. He attacks Doomsday because Doomsday is attacking his city and his people, just like Superman who doing the exact same thing. Not only that but Lex has seen what Doomsday can do, and has done, so it is incredibly brave of him to even attempt taking him down. There is one thing I didn’t like about Lex… the voice. Lex is voiced by Rainn Wilson, who is usually known as a funny man, I don’t know he just doesn’t sound like I would expect Lex Luthor to sound… not only that but I get SERIES James Woods vibes from it

Lois Lane is the Lois Lane we deserve. She is independent, strong and quite frankly BAD-ASS. Quite often in films, comic books and TV series, she is constantly being saved by Superman and often gets herself into trouble which sometimes distracts him. In this film, she is the one doing the saving – she steps in just as Superman is on his last legs and attempts to distract Doomsday so Supes has the time he needs to re-coop. For a human to do that against a monster is incredibly brave, selfless and fearless – that is Lois Lane. Not only that she acts as a focus for Superman, as Doomsday edges closer to Lois, he knows he has to stop him otherwise Lois dies. I think it puts it all into perspective for him and it really motivates him to take Doomsday down. 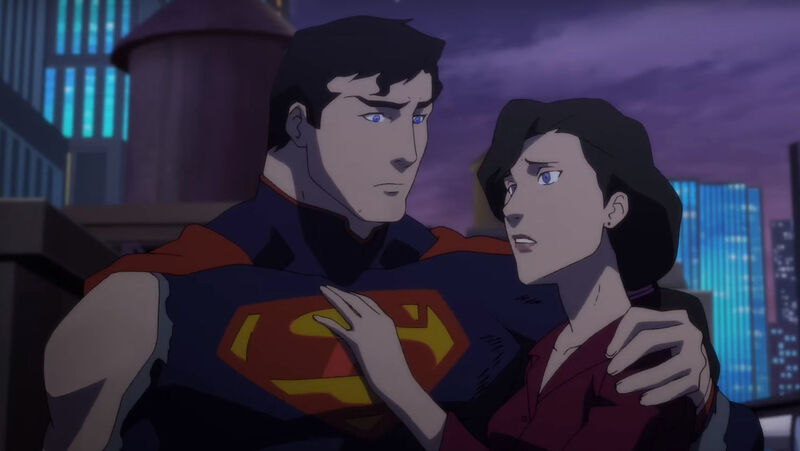 It does seem like some aspects are rushed though, like Superman’s relationship with Lois Lane. In the film she doesn’t yet know that Clark is Superman, and although he does tell her, it all happens very quickly. I think it could have started with their relationship being a little more intimate, but then we wouldn’t see Superman/Clark’s insecurities and that’s part of what gives him his humanly charm. There is a reason it’s so rushed, and that is because this story fits in with the previous animated series’ where Superman was actually dating Wonder Woman. I understand that they may wanted to have fast tracked it in order to tell this story, but I think it damages it a little. What I do love about Superman and Lois in this film is that they are voiced by a genuine married couple – Jerry O’Connell & Rebecca Romijn. Not only that but there is a perfect tribute to the late Margot Kidder within the film, as a bad-ass Lois saves Superman he says “you got me? who’s got you?” That part really made me smile.

It is also clear that this story is just a snapshot into that universe, there is clearly a lot of history within it that we don’t know about or haven’t seen. For example, the relationship of Bibbo and Superman, fans of Superman will know all about him and what Superman means to him. But fresh faces may not, and I think for their sake it could have perhaps been explained a little more. But, I do love that he is included in this story, as it is rare that Bibbo gets any limelight.

Essentially everyone knows the outcome of the film – well the title of the film is a bit of a spoiler. But, you know a film is good when although you know what is going to happen, it still gets to you. That moment is so emotional, we see many people who had links to Superman grieve and show their respects to the Man of Steel who sacrificed his life for them. For me, the most emotional is Bibbo’s, that left a tear in my eye. He questions why it was Superman and not him and I just think that is incredible thoughtful, but also relatable. So many people have though that at least once in their lifetime.

In the final scenes we see Superman’s resurrection. Although I’m glad he’s back, it is just too soon! We have just had that emotional scene and having his return straight after just doesn’t give it time to sink in and limits the effect of it. It seems very Justice League-like to me, and I think that could have waited until the next chapter – The Reign of Supermen. To me it doesn’t feel like we are given the time to think about the sacrifice that he has made, and it isn’t as impactful as it could have been and that’s a shame.

Overall The Death of Superman is a great animated movie, possibly one of the best I have seen. My issues with it are very small, and the good really does outweigh the bad. It is a great watch and I recommend it for any DC or Superman fan. It’s brutal, emotional, action-packed and fantastic all at once.

FILM REVIEW: Batman and Superman: Battle Of The Super Sons

3 months ago The Aspiring Kryptonian

4 months ago The Aspiring Kryptonian

6 months ago The Aspiring Kryptonian

9 hours ago The Aspiring Kryptonian