Before we delve into the story, I wanted to talk about the covers for this issue of Superman. As always the phenomenal Ivan Reis did a fantastic job of capturing the intensity and rage of our villain Rogol Zaar who takes centre stage on the cover wielding his mighty axe and clutching the tattered remains of Superman’s cape. This cover is made all the more epic by being presented in Foil format consistent with DC Comics recent initiative to present all its biggest and best comic releases in the month of October with striking Foil covers. Lenticular covers have been receiving a lot of love recently from the publisher so its nice to see the Foil cover once prominent in the 90’s making a welcome come back. 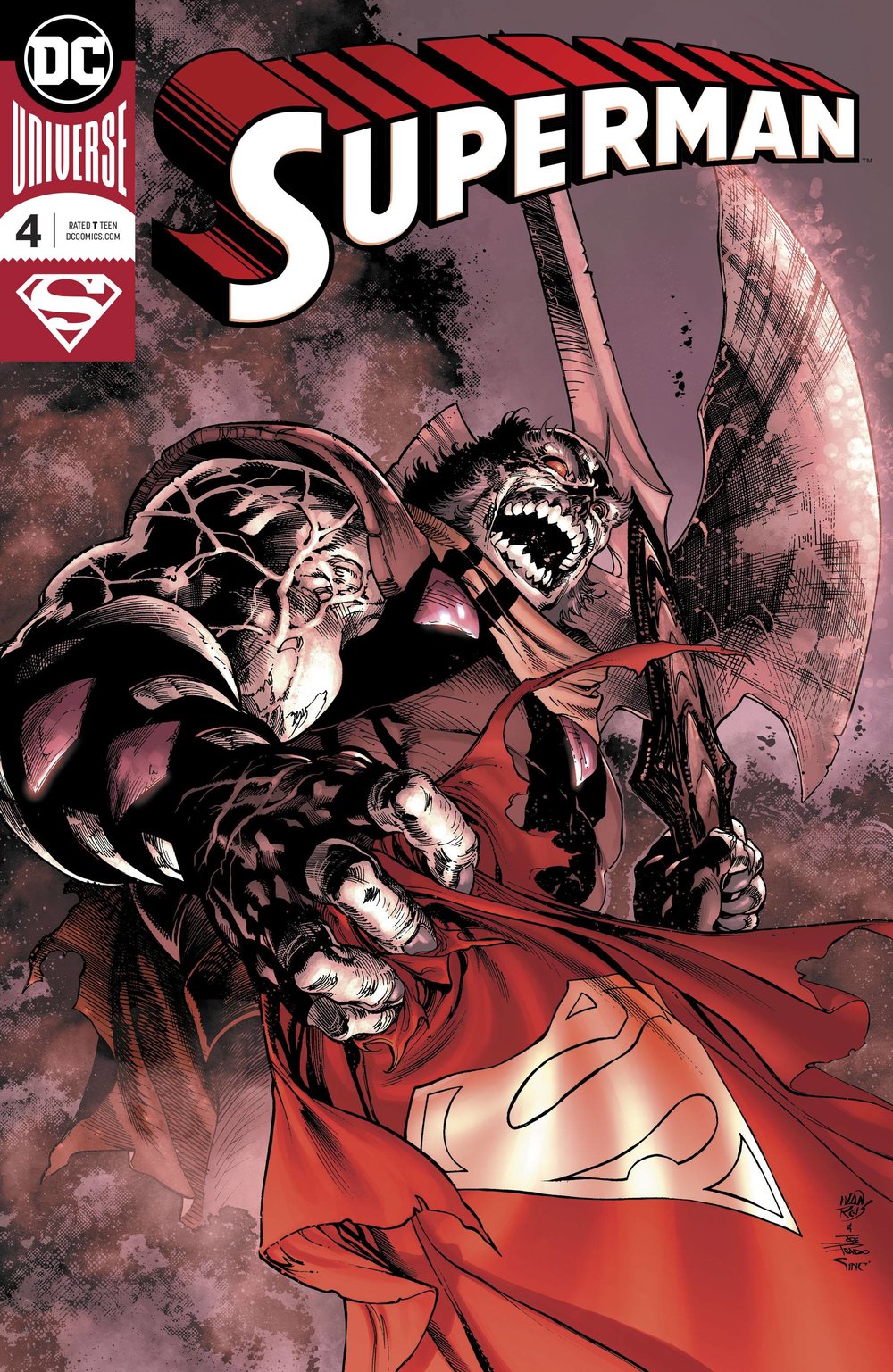 The Variant cover for this issue by the legendary Adam Hughes is stunning, It captures the core essence of the character as Superman joyfully leaps over sun kissed Metropolis in a single bound. For me this cover truly convey’s a real sense of hopefulness and joy which definitely benefits from DC Comics recent initiative to minimise Logos on variant covers to help emphasis the art.

Now to the story itself, picks up directly on from issue #3 where the Man of Steel is battling Rogol Zaar, Kryptonian terrorist Jax-Ur and a horde of rabid Phantom Zone Prisoners who have been rallied together by the vicious yet somewhat enigmatic Rogol Zaar. The action in these opening scenes resemble that of a big budget summer blockbuster. Ivan Reis is truly a master of his craft delivering epic scale combat. After a grueling battle, a severely outnumbered Superman is temporarily incapacitated by his attackers where his mind drifts to an earlier conversation had between himself and son Jonathan. The conversation between father and son slows down the break neck pace of the book for the better.

I found that some of the dialogue in this exchange was rather sweet specifically Superman referring to Batman as a brother, however I was more than a little disturbed when only seconds prior to this, Superman had referenced wanting an occasion to ‘pop Batman’s head off his body’ I know this was said in jest however it just didn’t sit right with me.

After finding inspiration from his father son moment the action kicks back in with Superman gaining his second wind and rallying back against his attackers, specifically targeting Jax-Ur. While Superman attempts to reason with Jax-Ur, confronting him with the revelation that Rogol Zaar claims to have destroyed Krypton, Ray Palmer with the aid of The Flash comes up with a solution to Earth’s displacement to the Phantom Zone. As The Atom’s plan is put into action, the shrinking and removal of earth from the Phantom Zone, Superman is once again locked in battle with Rogol Zaar. The action becomes frenetic switching between these two events now occurring simultaneously. At this point Ivan Reis is doing an incredible job of conveying these highly intricate events however I do feel the shrinking of earth could have been conveyed better perhaps using a splash page as oppose to the three small panels we received.

As Superman and Rogal Zaar square off once again on an outlaying mass of land, the Final page is devoted solely to Adam Strange. The audience learns through the characters eyes that earth never returned to its rightful place among the stars. Just what exactly went wrong with Ray’s plan and more importantly where is earth?

This issue of Superman was a blockbuster, it just felt epic from start to finish. Rogol Zaar is a fine mix of brute strength and tactical nous and I can’t wait to see what happens next with the character. The inclusion of Adam Strange was also a nice touch, a little nod to the characters appearance in the TV show Krypton perhaps? All I know is that Superman #5 can’t come quick enough.

6 days ago The Aspiring Kryptonian

6 days ago The Aspiring Kryptonian